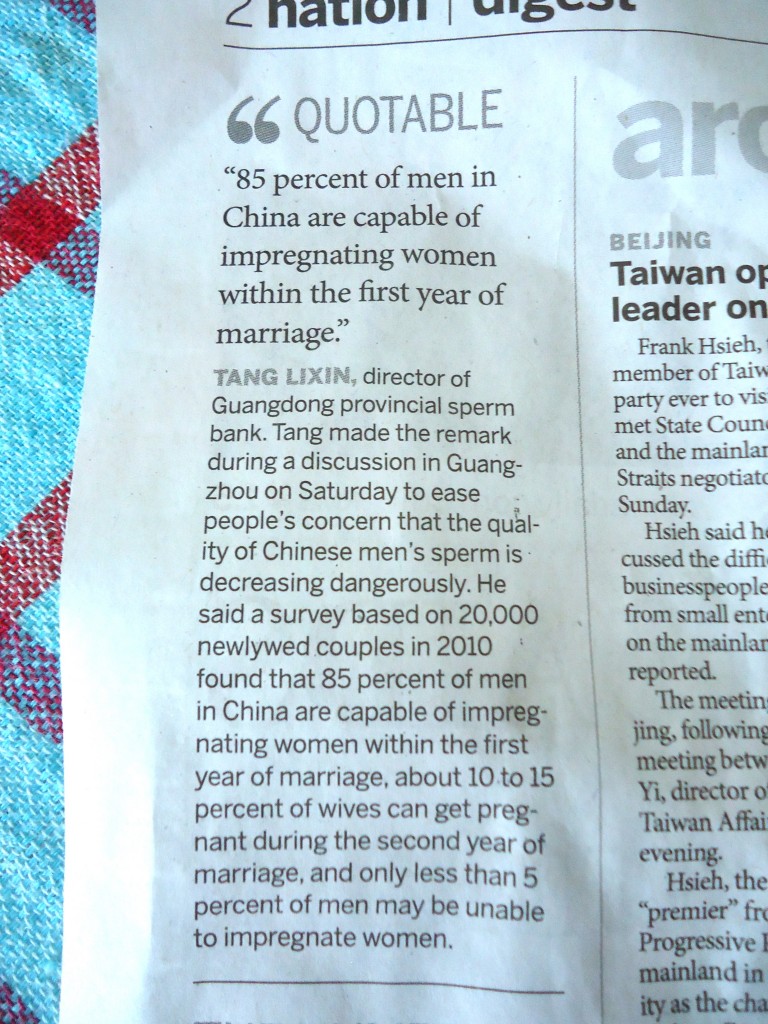 A really lovely thing about Beijing is the number of children and elderly people. That might sound like a weird thing to say, but I always found it really odd that in Manhattan everyone seemed to be between the ages of 21 to 50. The young and the elderly were…elsewhere.

In the parks, in the streets, outside my apartment block you can’t move without bumping into grandmothers minding toddlers, young families spending time together or groups of elderly men staring intensely at a game of Mahjong.

It makes Beijing feel like a real living city. And although it’s similar to New York in that most of the people who live here are orginally from somewhere else, it has a much more “family” feel to it.

As I get to know my Chinese workmates a little better I am increasingly less surprised when I learn they are married with a child.

At my former office in Australia the majority of my colleagues in their 20s and early-30s were unmarried and childless, here, the opposite is the case.

That said, it’s not so easy to get married in China. A recent newspaper article documented a growing trend for dating agencies setting up weekend trips for singles to get to know each other over a couple of days. In the West such a trip might resemble a Contiki tour on steroids, here the participants spoke of “brushing hands,” with a quickening pulse.

The article went on to explain that the trips often had more female then male participants. This surprised me because I had read a lot about the gender imbalance in China, a result of the one child policy and the cultural preference for boys. Stories in Western media often mention how this will affect millions of Chinese men looking for a wife.

But the article attributed the lack of male participants to the fact that many men feel they cannot look for a partner until they are financially secure. If you’re a bloke you are expected to be settled in a good job and own a house before getting hitched, not so easy if you are in Beijing or Shanghai with prohibitively expensive property markets.

This expectation seems to have created a feircely competitve dating scene. In 2010, a contestant on a TV dating show stated she would “rather cry in the back of a BMW than laugh on a bicycle.” sparking a bout of soul searching across the country.

It can also be difficult for women. An English language teacher from the UK I met recently was telling me a Chinese colleague of hers “can not get a husband” because she spoke English.

“She’s from a village and her parents want her to marry a plumber or a tradesman, but the blokes from the village won’t touch her because she speaks English, speaking English is a weird sort of commodity here,” the teacher told me.

If she hits 30 and remains unmarried she will accquire the charming label of “leftover woman.” There are growing numbers of these women in China, intelligent, young professionals who find themselves at odds with the traditional ideas of marriage and motherhood. As a fellow laowai, who has been here a lot longer than me, told me recently: “what’s happening with women in China now is essentially what happened with women in the West in the 1970s”.

At least we can be assured 85 percent of Chinese men are virile enough to keep the population ticking along.