On my first day at work in China my new boss told me it was very important they didn’t employ any spies. 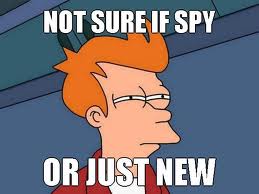 This concerned me for a few reasons. Firstly, if I was a spy I’d hardly list ‘espionage’ as a skill on my LinkedIn profile, so googling seemed a fairly slack “hope she’s not a spy,” check. Secondly, I share a name with a former character on Australian soap opera Home and Away, so I hope they weren’t expecting a petite brunette teenager with a troubled past and a penchant for sleeping around to turn up.

So China, you can rest assured your secrets are safe with me. In fact they are super safe because you could get your top generals to shout them at me and I would smile and nod and after a while just shrug apologetically and say “Wo bu dong, bukeqi.” Which means “I don’t understand, you’re welcome”. Of course, I would have meant to say,”Wo bu dong dubuqi” which means, “I don’t understand, sorry,”… but I always get those two mixed up.

This is quite awkward on the subway when the train jerks to a stop throwing me on top of some sweaty stranger whom I peel myself off from and say: “you’re welcome!”

No wonder the Chinese think foreigners are arrogant.

Once my new boss had double checked I was not a spy and I was told the other rules, (the main one being: “don’t get arrested, we had one guy who came here and he got in trouble with the police when he started a fight in a bar. (Pause) He was also Australian.”) I started work.

The biggest difference between working in a Chinese office as opposed to an Australian office is everyone is really polite. So far in China there is no swearing, no slamming of phones. No dirty jokes or inappropriate nicknames and a lot less office banter. I find myself putting on my telephone voice to speak to people and occasionally adopting a slightly manic Doris Day persona. If only we occasionally broke into song and dance it could be quite awesome.

No one eats at their desk, deadlines seem to be more of a suggestion than a rule and there are lots of meetings where everyone is really nice to each other.

The boss even comes around with sweets.

Hope he’s not a spy.