And thus our intrepid traveller left China and went to Munich (for a week) and lo, there she discovered pretzels and beer and bratwurst and lederhosen and dirndls and cobblestones and a number of people who looked exactly like the bad guys in Bond film: 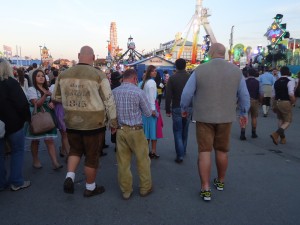 Oktoberfest patrons/henchmen of evil empire operating out of secret castle. You decide.

Lederhosen and Dirndls are to Bavarians what Bintang singlets and Southern Cross boardies are to Australians. And at Oktoberfest everyone wears them. The basic structure of Lederhosen seems to have remained unchanged over the years, however Dirndls seem to have evolved from Bavarian women’s wear into pirate wench frock. Personally I prefer the kind of dress as worn by the ladies below in the traditional dress parade on the first Sunday of the festival. Those are frocks that say: “Ja ich shall darn this goat and milk dis cross stitch and birth 14 children and drown dis cat in a bucket, but ich shall also swing a mean left hook at ya, ja.” 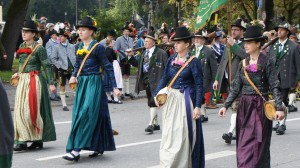 I love Germany, I love the guttural language, the earnestly polite people, the architecture and the beer. I love the quiet organisation of the place and fact my favourite instrument the piano accordion is played almost everywhere. But seriously Deutschland, what is with the food? 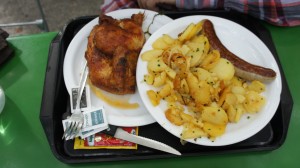 Please note, this is a meal for one.

During Oktoberfest it was nice to see that a festival which swells the city of Munich to about 7 million people over it’s two weeks (the population is usually about 1.3 million) hasn’t been completely overrun by drunk Australians and posh Brits in weird matching costumes (WHY do they do that? Anyone?).

Your intrepid blogger had a leaving gift from China of food poisoning which curbed, slightly, the consumption of beer and sausage. Ever vomited so hard you…actually never mind.

But despite my personal shortcomings, there were plenty of drunk Aussies about the place if you knew what to look for – the telltale Eagles jumper, the two blokes having a biff outside the “Australian” tent while their mates cheered them on, the violent vomiting as a friend holds the hair back screaming “Awwww Kaaaatie just get it awwll out luv and then we can go paaarty”. 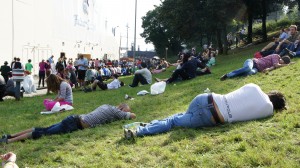 The Germans drank and sung songs, ate lots of sausage, drank beer by the litre and did it all in the spirit of Gemütlichkeit without beating each other up. This gemütlichkeit which has no translation in English, means cosiness, togetherness, safe and happy. I am familiar with the concept from the Danish word hygge which also encapsulates all those feelings. I don’t really know how the term is used in everyday German, but in Danish you can say “Thanks for the hyggelig evening” to a party host, or describe a bar or a restaurant as being very hyggelig.

We don’t have a direct translation in English which is a shame. In Perth there seems to be this problem of “out of control parties” in suburbia, or random violence in the nightclub area. This! In a wealthy, comfortable place! The government is cracking down – fines and jail time for party hosts, stricter penalties for violent crimes. But how do we stop it? How does Australia become the kind of place six million people can have a party and not want to deck each other by the end of the night? 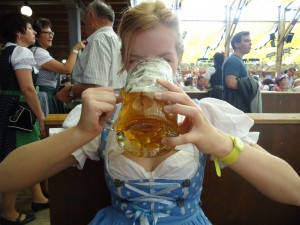 3 thoughts on “Meanwhile, in Bavaria…”