A burger restaurant in Beijing full of hipster Americans speaking a mix of loud English and bad Mandarin, or a French restaurant in Shanghai staffed by perfectly coiffed French waiters speaking sexily accented English, is probably going to be a safer bet than the place down the road offering “passta”, each dish with a fried egg on top.

There are some fantastic restaurants serving food from all over the world in Beijing and Shanghai. Shanghai in particular, being more of an international city, has excellent cuisine from all four corners of the globe. You can eat the best burger of your life on Monday, Lebanese food on Tuesday, Korean BBQ on Wednesday and Malaysian curries on Thursday. By the time the weekend hits you are debating whether to try that new tapas joint or just grab a salad at the Australian run cafe down the road.

In fact, you will struggle to get a bad Western meal in Shanghai. I’m sure they are out there, but there is so much good stuff you don’t tend to stumble across the bad. Not so in Beijing. Sanlitun, where many foreigners live in Beijing, has a clutch of decent Western restaurants, but outside that expat hub you will struggle. Next to our apartment in the capital is an American themed bar called Lakers. The drinks are cheap and the food is terrible. How cheap? Their Tuesday night beer special is “free”. They serve pizza that tastes like it was made by someone who once read about pizza in a book but has never actually tasted one before. It’s got corn on it. CORN!

Shanghai is, perhaps, less of a stranger to food from outside China. In the early part of the last century it was a global centre. British, French, Russian, Japanese and many other nationalities called Shanghai home before 1949. During the 1930s and ’40s the city became a safe haven for Jews fleeing Europe. The most obvious legacy this foreign population left on the city can be seen in the architecture. Shanghai is full of beautiful art deco buildings that jostle for room among the space aged skyscrapers.

But it also left it’s mark on the city’s diet. While fusion cuisine is almost unheard of in China, there are plenty of elderly residents in Shanghai who would be happy to sit down to a meal of fried pork chop and borsch, or a cup of muddy coffee, or a bomb Alaska – food they have been eating all their lives.

And to eat these things they will most likely head to The Red House. 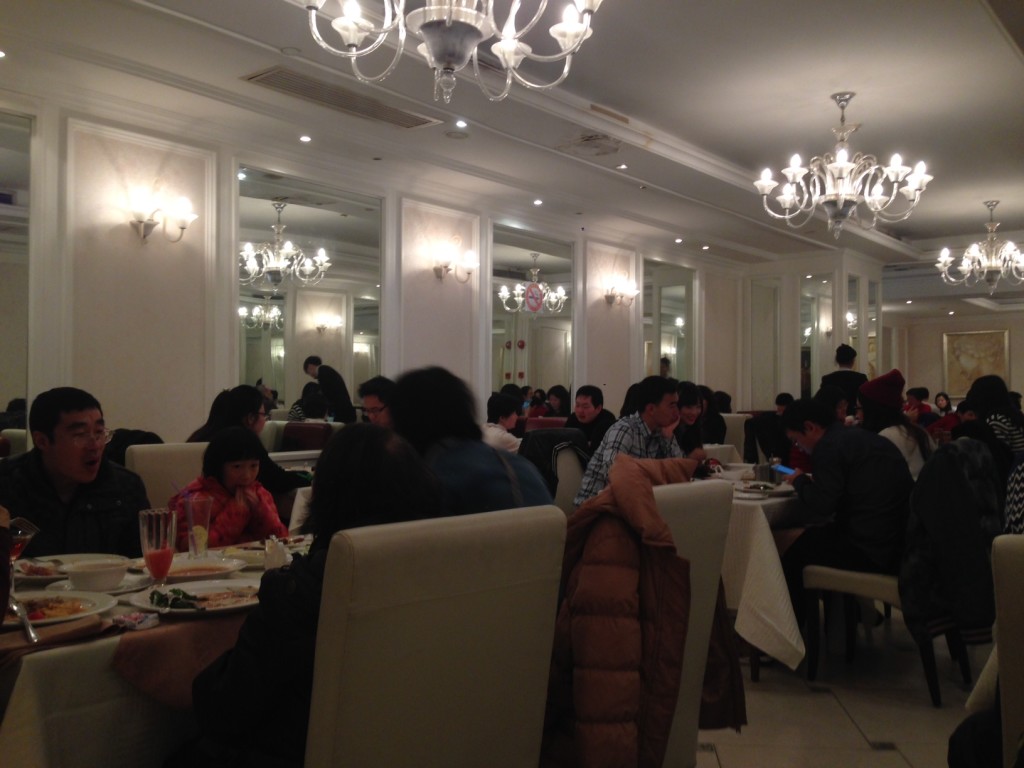 The dining room of The Red House, one of the oldest Western restaurants in Shanghai

The Red House is a Western restaurant that hardly any of the foreigners in Shanghai go to, let alone have heard of. It was opened in 1935 by Louis Revere, an Italian Jew and his French wife, and was named Chez Revere. Located smack bang in the middle of the busy Avenue Joffre , today called Huaihai Zhong Lu, it was a popular French restaurant in it’s day, attracting the city’s well-heeled. In 1941, Revere lost the restaurant, possibly because as a Jew, he would have likely been forced to live in the Restricted Sector, a 3/4 square mile section of the city that housed thousands of stateless refugees.

In 1945. Revere was able to get back into the restaurant game and bought a place he name Chez Louis. But history wasn’t on his side. After the communists took power in 1949 they kicked all the foreigners out, Revere returned to Europe, selling the restaurant for 2000 yuan to Shanghai man Liu Ruifu who renamed it The Red House.

The restaurant became synonymous with Western cuisine in Shanghai. Former Chinese President Liu Shaoqi has eaten there, as has former premier Zhou Enlai. In the 1980s people would wait for hours just to get a table.

Luckily, when DCR and myself visit, the day before Chinese New Year, we only have to wait a few minutes. The place is packed, many of the customers are comfortably in the 60+ age bracket. This is notable because why the under-30s might pack into an Italian restaurant to eat Chinese-afied Western food, (over cooked pasta to make the consistency more like noodles, a restrained use of cheese) it’s unusual to see older people eating Western food. We are the only foreigners and the staff, all wearing ill fitting tuxedos, seem wary of us. 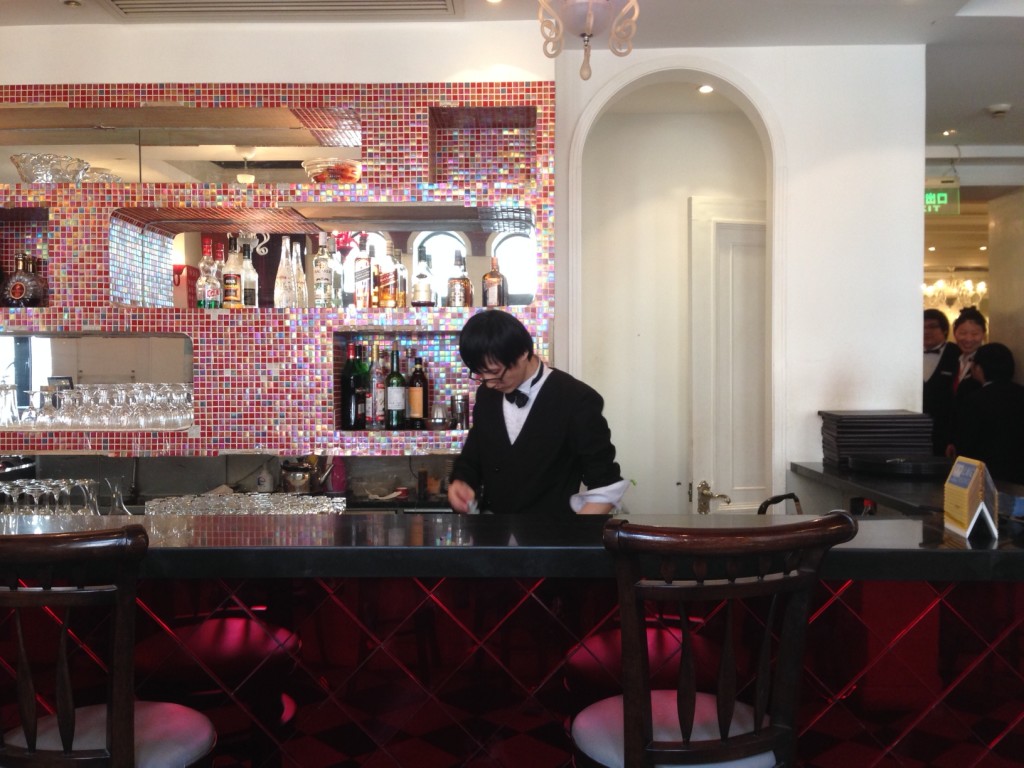 The bar at The Red House

We order fillet steak, medium rare, and the waiter brings up a saucer of tomato sauce. The food comes very quickly, the black pepper sauce in a gravy boat on the side. The steak is served with some fried basil leaves, half a cherry tomato and a handful of chips. The meat is far from the best I’ve ever eaten, but it’s passable, The sauce is good and peppery with a hint of butter. 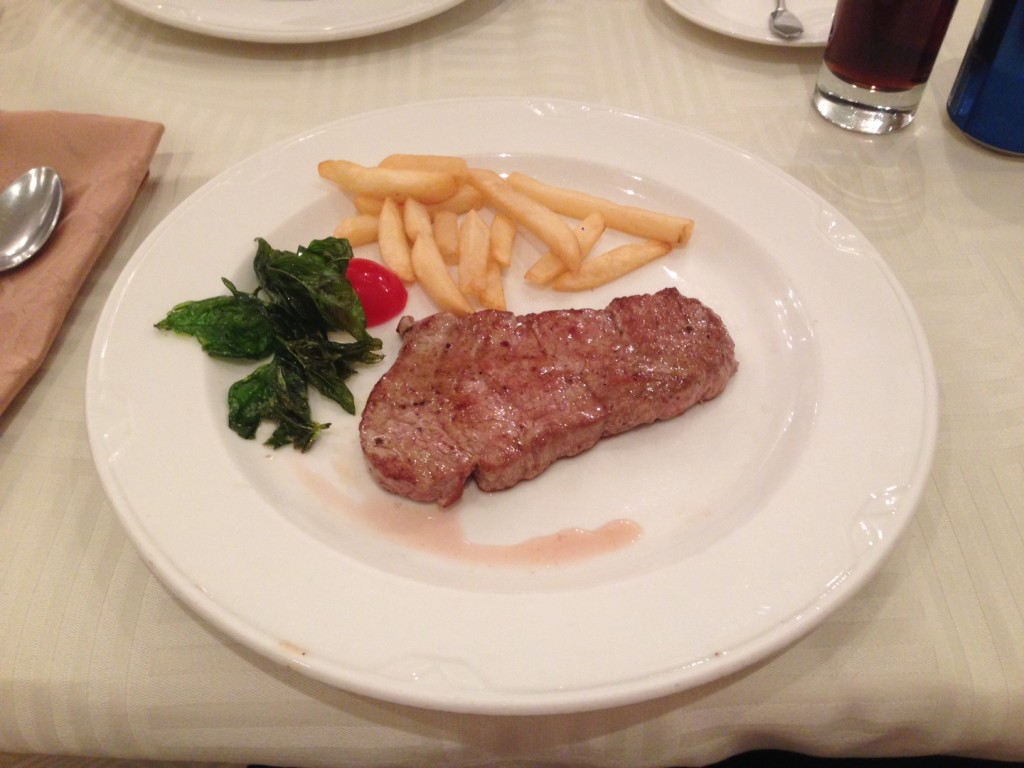 Fillet steak at The Red House

I notice a lot of the people on the tables around us are asking for doggy bags to take home their uneaten food. This is a very common practise in China, uneaten food is almost always taken home.

A little while ago I attended the opening of Pret a Manger, a British chain that was opening their first store in Shanghai. I got chatting to the Welsh manager who had spent a better part of a year in Shanghai sitting in cafes observing how Chinese people eat, planning to tweak the Pret a Manager format to suit the local tastes. As a result the Shanghai store has a larger amount of hot food – Chinese people tend to see cold food as a “snack” not a meal. You can buy half a sandwich, allowing you to mix and match your lunch – Chinese people like a variety – and there is a wider selection of teas on the menus.

Coffee is becoming a bigger part of the Chinese diet however – Shanghai has more than 250 Starbucks, but the coffee culture is very different from in the West. When I go in for my morning coffee the place is empty, but if you drop in after 2pm, there’s a line out the door.

Burgers are popular in Shanghai – and Monday is cheap burger night, where restaurants across the city offer two for one burgers to lure people out. I notice many of the Chinese customers pull the meat and salad and eat that, leaving the bun.

I once ate fried rice at a Chinese restaurant in Denmark that was boiled white rice with peas and cubes of spam. In Australia the deep fried meat in sweet, sticky sauces that’s so often passed off as Chinese food bares little resemblance to almost anything I’ve eaten in China, where the variety of food, from Yunnan in the south to Xinjiang in the east, is incredibly wide and far more diverse that what we get in Australia.

Not that Westernized Chinese food doesn’t have it’s fans – there is a restaurant in Shanghai, Fortune Cookie, that serves American-style Chinese food for all the American expats who can’t believe that the sugary deep fired stuff they used to eat back home isn’t the real deal. Who knows? Maybe an enterprising Overseas Chinese will one day set up a Chinese-Western restaurant in Australia, fried egg on pasta anyone?