Hong Tian woke before anyone else and threw her feet over the cot in the living room where she slept. She dressed quietly. She was pulling on her shoes when she felt the presence of eyes on her. She looked over to the doorway of the smaller bedroom where her granddaughter was peeking out from behind the door. “I caught you  Nainai,” Lan Yue giggled. She crept out of the bedroom and joined her grandmother on the bed, tucking her skinny legs underneath the blankets. Her bangs fell over her eyes as Hong Tian kissed the top of her head.

“Why are you awake so early my love?” Hong Tian asked her.

“Uncle snores too loudly, he wakes me up.”

“You should poke him to make him stop, you have school.”

Lan Yue nodded seriously. “We have a test today Nainai, in English”

“Are you good at English?”

“Yes, but only if I don’t have to speak it. Do you speak English Nainai?”

“No, but your grandfather used to speak Russian, they were our friends.”

“Oh,” Lan Yue brought her legs up to her chest and hugged them, as if trying to shrink the limbs that had grown faster than the rest of her in the past year. She nestled her head between her knees as she considered this new, surprising, piece of information about her grandfather.

Lan Yue had never met the man whose portrait hung in their living room, a stern, thin man in a Mao suit, but collected information about him like other girls her age collected stickers and swap cards. New intel was rare. When Nainai arrived in Beijing three years ago, one month after her husband had died, she had laid on the cot in the living room silent for the first week, staring into an invisable place. Lan Yue, then only eight and with legs of a more manageable length, had crawled into bed with her and stroked her hair and sung Chu Lian, an old song she had learnt in school. Nainai had smiled and said, “Your grandfather loved that song, we used to dance to it.”

After that, Nainai had spent less time on the cot and, much to Lan Yue’s relief, had started acting more like a regular Nainai. She cooked Shaaxi food that father and uncle loved and mother complained was too spicy. She brushed Lan Yue’s hair and read her poetry and six months ago she had started to go the park in the morning with the other grandparents to sing old songs which Lan Yue had heard her parents whisper was “good for her” and “it’s about time she made some friends here”.

But Hong Tian seemed reluctant to speak of her late husband, wincing at his name, so Lan Yue had only the scraps of information. He had been a history teacher, he walked with a limp, but not when he danced, and now she had discovered he had spoken Russian. This would require some consideration.

“What was the name of his friend?”

“Oh, little flower, he didn’t have any Russian friends, it’s just what you did back then.”

“Did he have a Russian name?”

“What? Of course not. He was Chinese.”

“I know that Nainai, but I have an English name.”

“Aaaapppoo?” Hong Tian sounded out the word. “What does that mean?

“It means Ping Gou, English people are called all sorts of things”

“They are called after the names of fruit!” Hong Tian shook her head in bewilderment, Lan Yue giggled.

“Shhh, you’ll wake your parents, or your uncle.”

Lan Yue rolled back on the bed in mock silent laughter pretending to eat an apple.

“Are you going to choir practice nainai?” she whispered.

Hong Tian slipped on her shoes and kissed Lan Yue on the forehead. “Try hard in your test today little Ping Guo.”

She waved goodbye as she slipped out the front door of the apartment, and hurried to the elevator. Outside the day was beginning. Autumn was here, the humidity has subsided and the air was hot and dry. The last remnants of the nighttime smog hung on the sky’s edge but there was wind – it would be a blue sky day. Hong Tian walked quickly to the park past the young boys on their carts starting their deliveries and the young girls in their smart jackets cycling to their offices. The migrant workers were setting up their carts selling pineapple and Jian Bing and the taxi drivers were scouting for their first customers of the day. Hong Tian joined the throng of people crossing Beitucheng road and into the park, a narrow stretch of green hung on either side of a sad looking body of water.This time of year the park was lush and green. Groups of men were huddled around games of Mah Jong or their songbirds in bamboo cages. There was a group doing Tai Chi and nearby, a smaller group was writing poetry on the pavement in water, dipping their long brushes in a small pot of water. 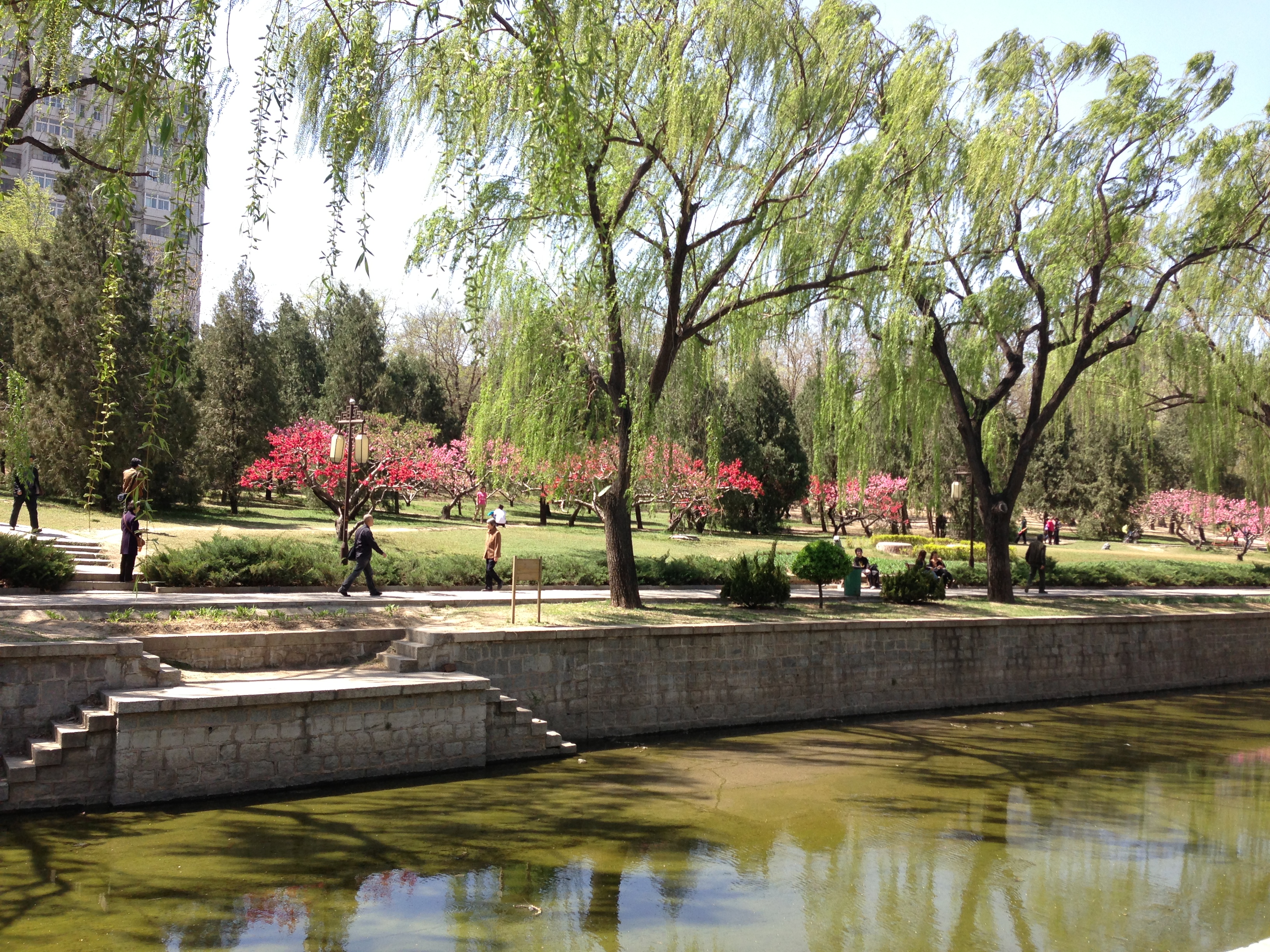 Hong Tian walked past all of them, doing her best to ignore the dog walkers and their animals that she tried to pretend didn’t scare her but how could they not? She counted two foreigners, both running with plugs in their ears like the ones her daughter-in-law wore while doing the housework, she had learnt not to stare now, foreigners were everywhere in Beijing and after she had been here for a few months she found some of them even spoke Mandarin.

Hong Tian quickened her pace when she saw the pagoda where the choir met to sing in the mornings. She couldn’t stand those gossiping ladies, who sung old revolutionary songs and odes to the Chairman. They were nostalgic for a time that Hong Tian wasn’t sure ever existed, at least in the way these ladies remembered, maybe things had been different in Beijing. They sung Internationale and then boasted about their sons who worked for Bank of China or their granddaughters studying in England. 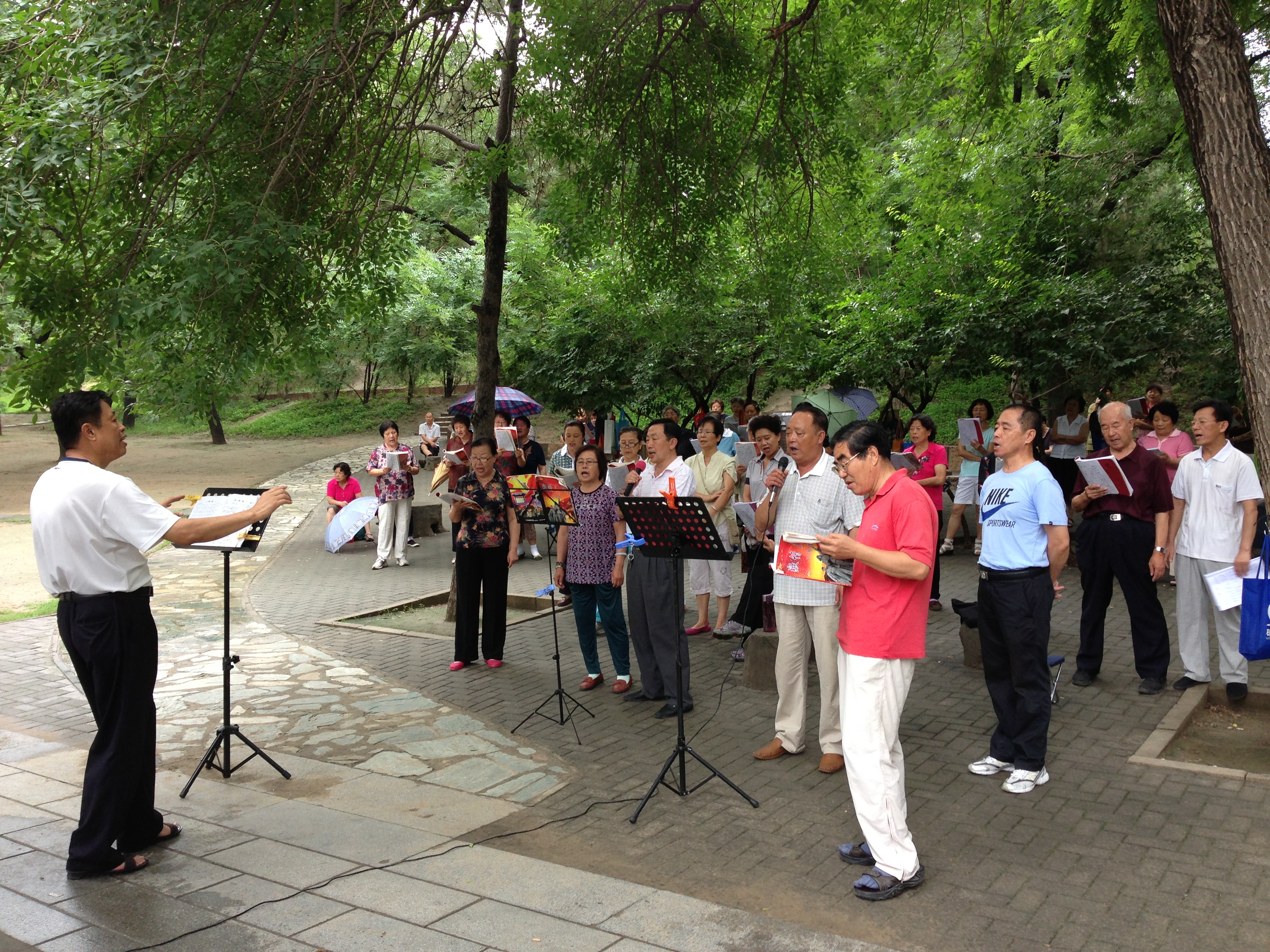 When she had passed the ladies she took a left up the path and entered another clearing and the noise of the park dimmed behind her. There was a small courtyard with benches around the side. The trees grew taller here and the clearing was always in shadow which is perhaps why the other groups who used the park in the morning avoided it. Which is why it was perfect.

She had first seen him there six months ago. She had come to the park to sing with the choir on the urging of her son, “to meet people,” he had said, although she suspected it was so she would stop bickering with his wife. After a week of singing she walked down to the park one day and decided she could not stand another rendition of The East is Red and when she saw the pagoda she had kept walking, heart beating a little faster. She had felt like a schoolgirl skipping class.

It was then she had seen The Dancer.

He was standing in the middle of the clearing arms raised in the hold position, eyes closed. His face was lined and his hair almost gone, but he held his back straight and was posed in a way that told her he still danced in the old style. She stopped, and feeling emboldened by her small act of rebellion of skipping choir, stood and watched him.

It was then the music started. He had a small tape player on one of the benches that she hadn’t noticed, and the first notes of Blue Little Flower started to play. The man started moving, swaying with an imaginary partner. He danced well, gliding seamlessly around the small courtyard. He danced and she watched until the song ended, at which point he opened his eyes and gave a start when he saw her watching. They stared at each other. There was a silence as they sized each other up. The dancer and the watcher, and Hong Tian could not help but notice how he resembled her late husband in the way he stood. Erect and proud, like a dancer. The next song on the tape had started, and suddenly, as if it were the most natural thing in the world, she moved towards him and they fell into step.

They danced more songs before the tape ran out. At which point he bowed his head and she curtsied and the dancer had collected his tape player and left. After that, every Monday, Wednesday and Friday they had met in the clearing. In six months they had never exchanged more than a few words, and never names. When they danced Hong Tian closed her eyes and took herself back to Shaanxi, to those hot summer nights her and her husband danced in the square under the statue of Chairman Mao. When their sons had left to make money in Beijing and they worked in No 3 School and spent the weekends dancing. She forgot the pain of the final years, when  the arthritis in his leg had gotten so bad the dancing had slowed, until he simply swayed with her in time to the music. She sometimes wondered what The Dancer was thinking, but she knew he was remembering another dance partner who was no longer on her feet. He danced like she did, as if trying to recapture a long ago memory.

Today was Monday and she was running late and was worried that the dancer would be gone, but when she turned into the clearing he was waiting. He smiled when he saw her and took her hand. “Xiaojie,” he said, he only ever called her young miss, which made her laugh. “I am glad you are here.”

They held each others gaze for a moment, then the music started, and they began to dance.